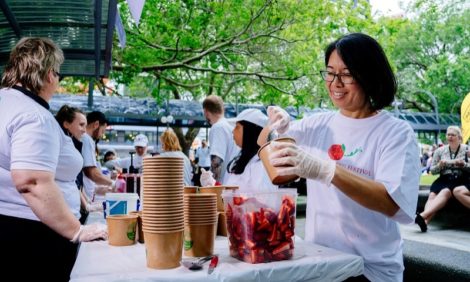 Today is International Volunteer Day. We’re marking the day by celebrating all the amazing work that millions of volunteers do around the globe.

We spoke to a number of non-profit and for-purpose organisations who rely on volunteers to help them make a big difference in the world.

A team of turtle scientists were growing concerned about the state of sea turtle populations in the North Queensland region. They agreed that more needed to be done to protect these iconic species. So in 2001, the Indo-Pacific Sea Turtle Conservation Group was formed, later becoming the Sea Turtle Foundation.

The team set out by addressing research gaps and developing strategies to reduce threats to sea turtles. The foundation has since expanded its activities to a national and international level, and continues to grow. The team focus on projects in three key areas: research, education, and action. As a small independent not-for-profit, the Sea Turtle Foundation is much more agile than government agencies and larger research institutions. This means they are able to react to issues as they emerge. They can also speak out about policies and regulations that affect turtle populations.

Volunteers are incredibly important to enable the foundation to act quickly when the need calls. “We have a group of around 25 trained volunteers who are registered to respond to stranded turtles. We also have several other volunteers who offer their time to help out with special events and activities as they arise,” says Johanna from the Sea Turtle Foundation.

It’s vital for the foundation to maintain a strong, trained team ready for deployment whenever turtles need help. Little Dreamers is an organisation developed by young carers for young carers. Their mission is to make sure every young carer has someone to care for them.

Maddy Buchner’s younger brother has a range of chronic illnesses so growing up Maddy helped her Mum by taking care of her brother.  Inspired by her own challenges and experiences, Maddy saw a gap in the family system: who cares for the carers?

So at the tender age of nine, Maddy started fundraising and this passion eventually became Little Dreamers.

“Our vision is for every single young carer around the world to be supported by someone or something by 2030,” says Maddie.

The organisation is now Australia’s leading young carer organisation. It supports young people between the ages of four and 25 across six direct support programs around the country. However, to continue to grow and make sure that no young carer is disadvantaged or left behind, Little Dreamers rely on their team of volunteers. The organisation currently has 50 volunteers whose roles vary from mentoring, events, holiday programs, admin, and team leadership.

“Having amazing and passionate volunteers is something we pride ourselves on, and gives both young carers and volunteers the opportunity to feed off and learn from one another, “ adds Maddie.

Volunteers mean Little Dreamers can maximise the quality of their programs and increase capacity. It also means they can look at expanding the organisation’s reach to all corners of the country. “Volunteers provide a fantastic support network, and help us learn new things as well,” says Maddie. If you’d like to support Little Dreamers, you can volunteer here.

Local residents of Scullin wanted to transform their neighbourhood into a vibrant retail area.

In October 2018, the Scullin Community Group was formed and it didn’t take long for things to get moving with the creation of a Facebook page. This connected the group with other local community groups, including the Southern Cross Early Childhood School, local businesses and government representatives. Together with the Scullin Traders, a community entrepreneurship hub run by the Scullin Community Group, the once struggling Scullin shopping area was transformed. It’s now a space featuring comfy zones for coffee drinkers, handmade products from Canberra micro-businesses, and a co-working space. There’s also creative workshops for the Canberra community.

The space is ran entirely by volunteers with a core team of about a dozen volunteers. Any profits the Scullin Community Group make are fed back into giving residents a place to be proud of and to share with others.

“This is a community-driven project where people power is changing our struggling local shops. Part of the beauty of the project is that people from all across our region – not just our suburb, but the neighbouring suburbs and further across Canberra – are excited and empowered by its potential,” shares Sue from the Scullin Community Group.

More volunteers would mean more opportunities for growth. “We’d ramp up our creative workshop program. We believe it has the power to help us become financially sustainable and turn our suburb into a creative hub,” adds Sue. “We’d also have the shops open longer hours, and probably start eyeing off some of the other local spaces”. The group also has their sights on a weekly local market, and more volunteers would certainly help make that a reality. For more information on how Xero supports volunteers and non-profits, check out the Xero non-profits web page.