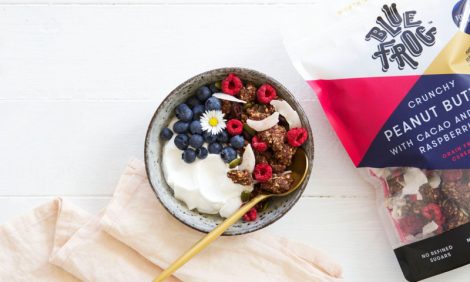 Genuinely nutritious and delicious breakfasts – the story behind Blue Frog When you think of a food technologist that spent over 20 years at the confectionary giant Mars, healthy breakfast cereals probably don’t come to mind. Let alone cereal that’s nutritious, as well as paleo, gluten free and refined sugar free, yet also tasty and delicious. Seems idealistic but impossible right? It’s not, in fact that’s exactly what Scotty Baragwanath from Blue Frog has created.

Blue Frog have built a business based on the notion of creating nutritious, whole foods that don’t compromise on taste. And they’ve done it very well.

Cooking up something special

Scotty’s passion for food was sparked early on by his mother who was an excellent cook. He explains that back in the 70’s his mum used to cook with coriander and turmeric, as well as other interesting spices which was pretty forward thinking, particularly for an era that is not exactly known for it’s cuisine. He received his first frying pan at age 5 and from there he decided he was going to be a chef. Unlike most people, whose 5 year old dreams fall by the wayside, Scotty has maintained his passion for food. He explains that this passion for good whole foods with incredible flavour is truly in his own DNA and he’s been able to transfer that through to Blue Frog’s.

Passing the test of his harshest critics

Scotty’s explains that while it might sound a bit cliche, the roots of Blue Frog stemmed from starting a family. He said that he became really conscious of breakfast, where you’ve got the built up tension of getting kids out the door yet also getting them to eat good whole food. He remarks that it was fairly hard to find nutritious cereal that their kids actually wanted to eat rather than just swirl around in a bowl. So they started playing around with recipes for breakfast. It started off with the things that the kids liked and then it branched off into other products.

Creating a sense of occasion

For Scotty a sense of occasion and rituals are very important. He explains that as a coffee aficionado the journey of getting there and the little rituals that accompany this daily routine are just as enjoyable as the cup of coffee itself. He remarks that usually the ritual of breakfast disappears as people rush out that door. He’d often thought, wouldn’t it be awesome if people could create something in a minute that tastes just as good as something you would get at a really cool cafe in the weekend. For Blue Frog, the holy grail is for people to actually to stop and regroup and make breakfast a real occasion. Scotty acknowledges that it’s an ambitious goal, but that’s where they would like to end up.

From the outset Scotty wanted to create something as accessible as possible. They looked at the market and realised that there were all these people with dietary requirements of paleo, grain free, gluten free and refined sugar free. So they thought, let’s play to this. But they wanted their cereal to be two fold, not only nutritious but also delicious.

Scotty explains that traditionally if you tell someone ‘oh it’s cereal’ and then you overlay that with grain free or gluten free their expectation drops tenfold. However they thought wouldn’t it be amazing to create the world’s best tasting cereal that everyone loves but also ticks all of those boxes. “A big piece of Blue Frog is this uber taste, so we want to really over index on flavours. We don’t want any subtleties but it all still needs to work in the bowl”.

The name Blue Frog came from an agency telling them they needed to make their brand personal. Scotty’s nickname as a kid was frog, as he was the youngest of four and was long and lanky. The blue evolved from the idea that if you take a frog and make him blue he instantly becomes memorable. Scotty explains “it’s just a subtle change and that’s what we are trying to say with our cereal. What we’re doing isn’t rocket science but hopefully we are creating something that is memorable and over delivers on all those sort of facets as well”.

Growing in leaps and bounds and winning awards – lots of them!

Blue frog launched in 2015. Since then they’ve undergone an entire rebranding as well as had considerable success and are stocked in Farro, New Worlds and selected speciality food stores. Blue Frog are actually New Zealand’s most awarded breakfast cereal company in the last 2 years (2015-2017). Additionally, just months after their launch, they won a 2015 NZ food award for their Kaipara Kumara grain free paleo cereal and were a finalist for Dark Cacao and Orange. In 2016 their Zesty Raspberry, Coconut and Toasted Almond cereal was a finalist and the Zesty Orange Syrup took out the Artisan category – giving them the flash title of 2016 Artisian Producer of the Year. Continuing the trend in 2017 their latest offering Probiotic Porridge – Vanilla Bean and Chia Seed is now a finalist in the 2017 NZ Food awards. Watch this space!

Now with a national distributor and sales broking team they’ve got feet on the ground all throughout the country. They’re continuing to push with innovations and have just released a new product this month Crunchy Peanut Butter, Cacao and Zesty Raspberry – a healthy and fanciful play on Peanut Butter and Jelly! Scotty is excited about the next stage and says that Blue Frog will continue to pursue creating memorable breakfast experiences every day.