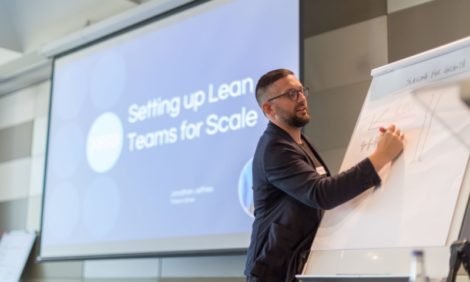 This week, Xero’s app partner community and preferred cloud integrators from Australia and New Zealand gathered on the banks of Melbourne’s Yarra River to discuss the future. If you couldn’t make it to the inaugural Xero Scaling for Growth Workshop, here’s what you missed.

The half-day event began with the recognition that apps fuel Xero customer success. Businesses with at least one connected app have 50% greater revenue growth than those with no apps, and they hire almost twice as fast, according to Xero Small Business Insights.

“We want to get your businesses booming, through the Xero Marketplace, to ensure our small business customers are booming too,” said Ian Boyd, director of financial web at Xero.

Some of the app makers attending were mature, such as Fathom and  Vend. Others were newer, with only a handful of customers. For them, start-up veteran Stefan Cordiner had advice on scaling up. Cordiner is the head of growth for MyXplor, a Melbourne-based start-up that has almost 500,000 parents using its app to interact with child care centres.

“If you don’t have product-market fit, don’t bother trying to scale,” said Cordiner, who also served as the Australian director for HotelTonight, an app with more than 15 million downloads. “That’s one of the errors of a lot of early stage ventures: They’re all about trying to hack growth. Stop. Get product-market fit first.”

What are the signs that product-market fit is right? Amassing 100 loyalists or advocates recommending your product, said Cordiner. Typically that hits at about $200,000 in monthly recurring revenue for a software-as-a-service company.

In a similar vein, Xero head of community Amanda Newton advised against trying to build a community of advocates too quickly. Newton moderates Xero’s Facebook group for Australian bookkeeping and accounting partners, which has almost 2,500 members.

“You don’t need thousands of people – just five passionate advocates is enough to start,” said Newton. “One of the common pitfalls is to launch an online community before there are people to populate it, only to watch it fail. It takes 6-8 months to build a community. Start small and not publicly.” Three tips from Newton for a successful community:

What do you do when your app is so good that customers don’t want to recommend it for fear of helping their competitors? Buildxact has that problem.

“Our customers call it their secret weapon,” says David Koopmans, chief sales & marketing officer for the estimating and job-management app that’s aimed at builders. “They’re not going to risk losing a competitive edge.”

So Buildxact has approached accounting and bookkeepers, who can recommend the app to help their building and tradie clients. When a small business client succeeds, so do Buildxact and their accountant.

Tradify, on the other hand, has a user base of not just builders but plumbers, electricians and HVAC installers. These varied customers talk to each other – who’s trustworthy, who’s good – and they’re eager to recommend time-saving tools, says Emma Crawford-Falekaono, chief revenue officer at Tradify.

Tradify considered starting a referral program that would reward users who recommend the app. When Crawford-Falekaono ran the idea past some loyal customers, their response surprised her.

“They were against it,” says Crawford-Falekaono. “They didn’t want to appear ‘owned’ by any company and wanted their endorsement to come without any appearance of a conflict of interest.” With over 700 apps available in the Xero Marketplace, app partners wanted to know: How can we stand out from the pack? And how can we better access Xero’s 1.6 million customers?

Other presentations included talks from small business advisor BlueRock; Luigi Prestinenzi on next-level networking; Ian Rose on presenting with impact, Jonathan Jefferies on setting up lean teams for scale; producing events with impact from Cara Weers, the brains behind Xerocon; and a keynote presentation from futurist Dave Wild.

“At Xero, we speak regularly to app partners who are working separately but aiming at a common goal: the success of small businesses and their accountants and bookkeepers,” said Bryan Williams, head of ecosystem & marketplace for Australia. “So we wanted to get everyone in the same room. An exchange of ideas benefits everyone in the ecosystem. And that’s good for small businesses.”

Sharing insights with other app partners was a key benefit, said Paul Murray, who is both an accountant and the founder of practice app AccountKit, which won Xero’s 2018 award for Industry Specific App Partner of the Year.

“I spend a lot of time mentoring our business clients with their planning, but there’s nothing like that for us, the app makers,” said Murray. “That’s what has been so great about today, whether it’s been talking to others about their sales practices, how they collect user feedback or even having a shoulder to cry on with those who’ve been through it all before.”

If you missed this week’s event, there may be a followup in the coming months. Let the Xero ecosystem team know you’re interested, and stay in touch! We’re committed to your success.