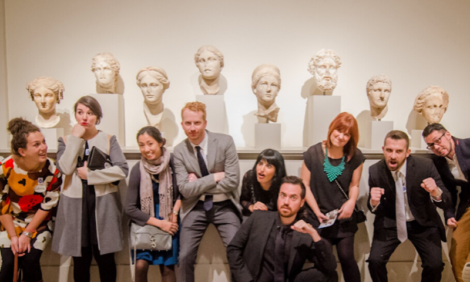 Museum Hack came to be on a star-crossed night in 2013 when founder Nick Gray went on a date to the museum and suddenly understood the meaning of love at first sight. Nick had fallen head over heels…with the museum.

Nick started giving tours of The New York Metropolitan Museum of Art to friends and family. Word spread about these quirky, fun, and sometimes scandalous museum tours. Overtime, Museum Hack began to lead public, private, and even corporate team building tours of New York City’s best museums. Within a few years, the company had grown quickly and operated its ‘renegade museum tours’ in five major cities across the country.

2019, however, proved to be the company’s largest year for change. Midway through the year, Museum Hack’s CEO Tasia Duske and Director of Marketing Michael Alexis purchased the business from Gray and swiftly began to implement their vision for Museum Hack’s growth, which included expanding their museum consulting services and introducing a larger menu of company team building activities.

Xero, the new business owners say, played a key role in determining exactly what that vision was, and, perhaps most importantly, how Museum Hack could get there.

“We switched gears in 2019 from a focus on company revenue to a focus on company profitability,” Michael shared. “Xero allowed us to easily shift our goals and track the right data so we could see where the company was headed. We could see what was working, what wasn’t, and where we should dedicate the bulk of our attention moving forward to achieve the profit goals we laid out.”

Museum Hack’s mission has always been to bring museum skeptics into the museum and convert them into lifelong museum lovers, and that’s one thing that won’t change under new ownership.

“There are a lot of people out there who think museums aren’t for them,” Michael said. “We know that’s not true. Our battle is convincing folks who wouldn’t ordinarily go to the museum that they should give it a try with us. Once we’ve got them in the building, the rest is easy. Museums are full of so much life and history. Every object in the museum has a story to tell. Our job is to bring those stories to life and show the audience that there’s a connection between their lives today and this two-thousand-year-old piece of pottery.”

One of the key ways Museum Hack brings unexpected audiences into the museum is through the company’s corporate team building activities.

“When you think of company team building, you’re probably not thinking of a trip to the museum,” Michael admitted. “But our tours are fun, quirky, and effective. You’re going to have a great time on a team building tour with us.”

With operations in several major cities across the country, including team building activities in New York City, Washington, D.C., Chicago, San Francisco, Los Angeles, Boston, and Philadelphia, Xero helps keep Museum Hack ahead of the curve with real-time numbers on sales in each city. Data gathered from the platform helps push forward major company initiatives. It also helps the team figure out when projects should be tweaked or abandoned entirely.

“We use info from Xero in the majority of our meetings, especially when our marketing and sales departments come together to collaborate on new initiatives and assess the success of past projects,” Michael said. “It’s not unusual for us to pull up our custom reports and do a deep dive into the data to see exactly where we should streamline our focus for the month. It’s easy to see where a little extra attention would be beneficial.”

Using Xero’s data and custom reporting features isn’t limited to times when Museum Hack’s marketing and sales departments meet to review goals and revenue. Museum Hack makes a point of being transparent about the business’ financial health with the entire company.

“We’re an open book,” Michael told us. “We regularly share details of our company’s financials with the rest of the team. We take this open, transparent approach because we think it creates a healthier workplace when team members can see exactly how their work affects the bottom line. It also helps everyone on the team make better, more informed decisions when they know exactly where the company stands each month. Xero has made this a lot easier for us to do.”

Under new ownership, Museum Hack has big plans for 2020 and beyond. Museum Hack wants to reach more museums and more people in more locations, and that may even include expansion overseas.

“We think museums are awesome,” Michael said. “We want to keep sharing our love and passion for these amazing institutions with the world. That’s one thing that will never change at Museum Hack.”

The post How Xero helps Museum Hack operate transparently and plan for the future appeared first on Xero Blog.