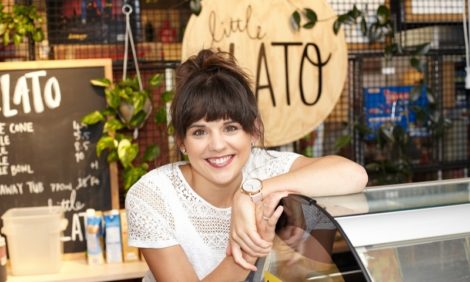 Welcome to Residents of Rewired! It’s an occasional series about some of the interesting residents we have nestled in our new Auckland co-working space. We chat to them about their ventures, their passions, some fascinating facts, and what makes them tick.

We talk to Hannah Wood, the owner of Little ‘Lato, about how her passion for gelato has led to building her own business from the ground up.

Tell me a bit about your story

I started Little ‘Lato as a gelato and coffee bar within Crave cafe in Morningside. Then last December I opened up another store within Auckland Fish Market, this time teaming up with Good Karma Coffee.

I’ve always been a bit of a foodie and love ice cream, which is where my dream started. While studying at Food Tech at Massey University, I first heard about the gelato university over in Italy.  I added it to my bucket list and thought it would be something cool to do at some point in my life, even if only for fun!

I had a summer job at Much Moore Ice Cream before shortly starting Fonterra’s graduate programme. It was at Fonterra where I worked with brands like Tip Top on a probiotic ice cream. It was while working at Fonterra that I found out about a scholarship offered by the New Zealand Institute of Food Science and Technology for personal development through overseas travel. The criteria was really vague, so I put together an application for the scholarship, and was successful.

A main focus of the scholarship was to study at Carpigiani Gelato University. My motivation to attend was initially out of interest. However, it wasn’t long before I was inspired and the dream was sparked. Gelato is massive around the world but it’s not something really big in New Zealand. We’re big consumers of ice cream, and it just seemed logical that gelato could become popular here so I thought it was a good opportunity for a business.

I started my business 18 months ago, and now here I am. At the moment it’s mainly me as a one-man band, and I have a few part-time gelato makers that help out.

I want to surround myself with as many people as I can, and also to have other people to be inspired by. I can work from anywhere and do spend time between my two shops, but that’s very productive because there is always other work to do. Here, I can just come and put my head down and crank out work or I can connect with new people who I can learn from.

How did you choose the name Little ‘Lato?

I sent a survey to a whole bunch of my friends, validating some different concepts. I suggested six or seven names and on the morning that I sent the survey I just thought, ‘I don’t know if these names are quite right’. So I added the names “Little ‘Lato” and “Little Churn” just as an off-the-cuff type thing.

Little ‘Lato was one of the favourites, and now I can’t imagine it being named anything else.

What is the most rewarding thing about your journey so far?

It’s really rewarding to be able to build a brand and do something that I am passionate about. I love that I can create products however I want. If I want to make a new gelato flavour, I can make the gelato that day and sell it straight away. Having a brand that I am proud of is exciting.

Okay, so what are the most innovative flavours that you have created?

I’ve done alcoholic – so pink champagne, beer, and pink gin. I’ve done bacon and maple walnut; goat cheese, honeycomb and rosemary; fairy bread. Pretty much any flavour that I like, I try to make into gelato.

What is your favourite flavour?

Speculoos is my favourite flavour. It’s a Dutch biscuit that is made into a gingery-caramel spread and it’s so good. I brought the spread home to make into gelato after falling in love with it while I was in Europe.

What have you found to be the most challenging thing about owning your own business?

The challenge is that I am literally doing everything. Having to do things that are definitely not my strengths and not what I enjoy, and then also being the go-to person for everything. If something breaks down, I’m the one that has to do all the problem-solving.

And lastly, what advice would you give those wanting to start their own business?

I think one of the biggest pieces of advice I would give is to surround yourself with as many people as you can to learn from. Get out there and try to meet as many new people as you can at events, courses, workshops – wherever you can, to just learn from them. There’ll be heaps that you don’t know at the start. There’s still so much that I don’t know, and it can get quite overwhelming but if you just get something up and running then you can just slowly build on that and make improvements along the way.